Thank you to McDonald’s for a wonderful trip to the 2012 Olympics. This is the world’s biggest McDonald’s that seats 1, 500 at a time and has 2,000 of their best employees working there. After the games, the building will be taken apart and used in the building of new McDonald’s in the UK as well as re-modeling of existing restaurants. 75% of the materials in the Olympic McDonald’s will be recycled.  The Happy Meal box pictured is the actual one that I was served my meal in at the world’s largest McDonald’s and brought home with me.  Their menu is a little different from ours and the Olympic Happy Meal Toys are only available in the UK.  McDonald’s managers Alan Butchers and Jamie Baryaclough were beaming with pride and made us all feel like VIP’s.
July 29, 2012 By sydneymccoy in Olympic Park

These are pictures of the London Olympic Park.  It is huge.  The torch is inside the stadium,  where they had the opening ceremonies, the ArcelorMittal Orbit is a metal structure that stands 377 feet high and cost 19 million pounds.  It has two observation towers and a restaurant.  It will remain in the park after the Olympics.   There are all kinds of events going on at the same time and you can hear the crowds roar!  It is electrifying.
July 29, 2012 By sydneymccoy in Uncategorized

A lot of people ride their bikes to work even with dresses on!  Very few people wear helmets and they have no fear of the large double decker buses.  As a tourist, we tried to rent a bike but found out that you have to have a computer chip in your credit card for it to work in the UK.  They drive on the opposite side of the street than we do here in the USA and their steering wheel is on the right hand side of the car.  It takes a while for you to get used to looking both ways at a crossing as they are going the wrong way!  You have to be careful with the pedestrian crossing signs as they can have two on one crossing that are on different timers and there are a lot of blind corners when you cross.  I loved the tube or the underground it got us around town in no time and was not crowded.

July 29, 2012 By sydneymccoy in Uncategorized

Today we walked through Hyde Park and went to several Museums just outside the park.  We visited the Natural History Museum and Science Museum.  They were huge and I got to learn a lot and hold some dinosaur bones.  The walls are so beautiful and have all kinds of animals sculpted into them .  We also saw a live show on the outside of the building.  On our way home, we saw Prince Charles!
July 29, 2012 By sydneymccoy in Uncategorized

July 29, 2012 By sydneymccoy in Uncategorized

July 28, 2012 By sydneymccoy in Uncategorized

On Friday night we went to the Purple Dragon.  It was a fantastic place and gave the kids, who came from all around the world a chance to meet each other as well as the parents.   The food was delicious and we made cupcakes, a braclet, I sang some Taylor Swift songs in the music room, jumped in the ball pits and got to do a shooting game.  What a great way to end our first day!  Thank you McDonald’s

On Friday we went on a duck tour.  It was amazing.  First we started out on land and the splashed down into the water.  We saw a lot of things along the way and learned a lot of history about the city.  We started out at the London Eye which is the tallest ferris wheel in Europe where they have also put in a temporary amusement park called, London Fun Ground.  It is now the most popular site for marrige proposals passing the Eifel Tower.  There is a fifteen minute time frame from the top to the bottom…so hopefully the answer is yes!  We saw the House of Parliment, Battersay Park, the BR Imax Theatre which has the biggest screen in the world, The monument of Great Fire of London in 1666 which has 311 steps to the top, Westminister Abbey, the theatre disrict and even the building where Sir Elton John lives.  We learned about the plague that they had due to the poor sanitary conditions and the mice and fleas.  Did you know that the poem “Ring Around the Rosies” was from that time…they used to carry around a pocket full of posies to ward off the bad smell of death.  \soon after that, a royal baker did not put out the fire in his bakery and it caught on fire.  The houses at that time were made of wood and thatched straw roofs and most of the city burned.  Only 12 people were reported to have died and it killed the mice population which helped to get rid of the disease.  While we were on the river, we saw a floaing fire station.  We also saw the Houses of Parliment which has two different clored awnings and enterances.  Red is for the House of Lords and green is for the House of Commons.

Hello everyone…this is the McDonald’s playroom in the Lancaster Hotel.  There are so many cool games and things do do.  I have met a lot of people from all over the world today that are winners of the Champions of Play.

July 26, 2012 By sydneymccoy in Uncategorized 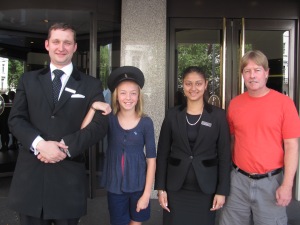